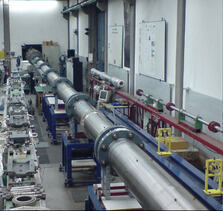 A shock tube has been modified to perform airfoil testing at transonic Mach numbers and relatively high Reynolds numbers extending up to 40 Mio. The flow behind the incident shock wave provides the testing flow. The overall testing time is in the order of 5-10 ms, which is very short compared with that of conventional wind tunnels, but long enough for flow establishment and to perform reliable measurements during stationary flow period. The facility described offers the possibility to perform high Reynolds number testing at low cost and to avoid the cryogenic wind tunnel technique but at the expense of a short running time and a relatively small test section cross size.

In the second picture, the working principle of the tube is schematically shown. The shock tube is divided into a high pressure and a low pressure section by metal diaphragms. In this case, the high pressure section is filled with compressed air up to the initial filling pressure p4 at the temperature T4. The low pressure section is filled with test gas, typically nitrogen or air of pressure p1 and temperature T1. In our case, the temperatures T1 and T4 of the test and driver gas, respectively, match ambient temperature. Because of the pressure difference p4-p1 after rapture of the main diaphragm, a planar shock wave develops and propagates with velocity us downstream into the low pressure section compressing and accelerating the test gas at the same time. The strength of the incident wave is such that the desired transonic flow establishes behind it. The total length of the shock tube is 35.5 m, and its inner diameter is 300 mm. The maximum working pressure of the tube is limited to 25 MPa. The overall length of the facility consisting of shock tube, test section, and dump tank as shown in the picture is 46 m.

Shortly after the bursting of the main diaphragm between the high and low pressure sections, the incident shock wave enters the test section, followed by the transonic flow. The test section is designed for a maximum static pressure of 4 MPa, which is necessary to achieve high Reynolds numbers in the order of 40 Mio. based on a model chord length of 100 mm.